Our very own Back to the 80's and DoJo Weekend Breakfast presenter Joe Petrie is in training ahead of his 10k fundraiser.

"Rossendale Hospice is a local charity which cares for patients and their families living with cancer and other life-limiting conditions. Right now they've got LESS money to do MORE work...so I'm doing a 10k "virtual" Santa Dash on Dec 5th through Rossendale.

My target is to do the 10 km in under one hour which given that was retching earlier this week after only 3.5 miles looks like it's going to get painful.

If you would like to support him in his efforts please do head along to his Just Giving page and spare what you can. It's all for a great cause.

Rossendale Radio is living it large knowing that Clubland mega-star Graeme Park will be bringing his Long Live House to Saturday evenings as of 21st November. Get ready to dance the winter nights away with some absolutely scorching dance mixes. You don't have as many years of experience as Graeme has and not know how to heat up a dance floor, even if it is just in your living room. Join him from 10pm and dance like you're 18 again, just remember to stay hydrated.

Rossendale Radio was so proud this morning to welcome Saj Akbar to the team with her first time driving the desk during Tuesday's Happy Hour. Saj is a well respected local Recruitment Specialist with her own podcast who has plenty to bring to the team and we can't wait to hear more of her.

Tony Copley Barlow has received his brand new Amazon Echo Dot from Rossendale Radio for winning our Spot The Car competition. All he had to do was take a photo and send it to us. More competitions to come so stay tuned.

As we head into November, Rossendale Radio is going from strength to strength. Despite all the troubles in the world the station is keeping its feet on the ground and carrying on regardless. This week, they are proudly launching their new Winter schedule.

A brand-new line up featuring faces old and new is now in place, alongside a redesigned station website, fresh social media plans and crucially new advertisers. “It’s been a lot of hard work turning the ship around in the midst of all that's going on in the world...” said Station Manager Tony Nixon “...but the team we have in place has pulled out all the stops - we’re really excited about the new line-up”

The Winter schedule sees Valley favourite Peter Sweetmore (often described as THE voice of the Valley) returning to the station three days a week for the newly branded Valley Breakfast. With local poet and Weekend Wind Down presenter Paul Jenkins waking up the Valley on Tuesdays and Thursdays - they’re promising a cheery start with a big smile to take you through the dark mornings that are fast approaching.

Sophie Lord, who last presented at the station during its first incarnation ten years ago is also back with her “From Stage to Screen” show on Sunday nights. She’s joined on Mondays by former 2BR rock legend Andy Turner who has taken over the reins at Rossendale Rocks. Another past 2BR favourite Dave Metcalfe moves to ‘The Valley Today’ while also keeping his decades hour 2-3pm each weekday.

But there are a bundle of fresh faces appearing at the station too. David Reader, a local DJ with a big reputation is taking on a number of new slots - most notably ‘The Big Night In’ on Saturdays 6-10pm. “Big tunes, party classics - it’s like having a mobile DJ sat in the corner of your living room”

Design guru and Yorkshire Pudding Melanie Kemp, who has also been responsible for the station’s website relaunch takes over on Wednesday nights for the ‘Midweek Music Show’. Hand selecting tunes you never even new existed, it’s a real show for music lovers. Melanie will also be taking on the Sunday lunch show from 1-4pm.

Joe Petrie picks up the reins on Thursday’s 80’s show, but is also set to take his place as resident teaboy for the stations new madcap weekend breakfast show. Alongside Dorrie Partington, the ‘Breakfast Dojo’ is guaranteed to bring a chuckle Saturday and Sunday mornings with sing-alongs, sass and general silliness all round. Dorrie will also host ‘The Valley Today’ from Wednesday to Friday.

Completing the line up will be Marie Baistow with the Mental Health Matters show; Catherine Dobson with the local Business hour - 'Show Business' ; Heather Parsons in the hotseat for Sunday brunch and finally Craig Taylor, who will be fronting a brand new Country show on Tuesday nights.

“It’s jam-packed and there’s such a great team ethic here at the station now” said Catherine. “Everyone is looking forward so much to getting on air and being the Voice of the Valley”

... and it's FREE to Text/WhatsApp us if you get free text messages as part of your bundle.
We've already had some great images sent to the studio as the service launched and we're hoping to bring even more features to the service soon - including allowing listeners to leave us voice messages to broadcast on air.
It's all go at 104.7 Rossendale Radio at the moment!

Rossendale Radio to attend as The Hill Ski Slope reopens October 24th
The Hill Ski Slope in Rawtenstall is finally re-opening later this month after closures due to the Covid Pandemic, after securing its future by transferrng ownership over to Rossendale Borough Council Leisure Trust.
The slopes are open for ski, snowboard and tubing sessions again from October 24th and tickets can be prebooked now.
Rossendale Radio will be at the re-opening 10-2 with interviews from the staff and visitors to spread the good news and help revitalise Rossendale tourism. Look for our Rossendale Radio car, come say hello to us and join in the slippery fun. We might even takes some requests for back in the studio!

Rossendale Radio nominated for the 'Valley at Work' award

We were absolutely delighted this week to hear that we have become a nominee for this year’s Rossendale Business Awards.

The awards, which celebrate the thriving business community in the Rossendale Valley are always a great way to shine a light on organisations that have been working hard throughout the year in the area.

We’d like to publicly send a big thank you to those who have nominated us to be considered for the Valley at Work award. We will, of course be covering the awards as part of our programming and keeping our listeners updated on the great work going on by businesses across the Valley – even in these challenging times!

The Voice of the Valley hits the road!

We are so pleased with the delivery of our new station car from our friends at Countryside Autos in Waterfoot!

The Skoda estate has been decked out in our station branding and can now be found around the valley promoting the station and most of all – promoting the Valley!

From Crawshawbooth to Bacup, from the centre of Haslingden to the tip of Todmorden, we’ll be out and about and hopefully in time getting to see some great community events too.

As a special launch we have a competition to spot us while we're out on the road. If you see the station car whilst on your travels, take a quick pic and then send it over to either studio@rossendaleradio.com or upload it to our facebook page. You’ll then be entered in our prize draw to win a brilliant amazon echo dot – meaning you can listen to the voice of the valley anywhere you want to in the house!*

Keep your eyes peeled – you never know where we’ll turn up!

*The amazon echo dot competition will run until Friday 23rd October when a draw will take place live on Bob Chadwick’s Valley Drive show – make sure you get your entries in!

Local teen talks of her fundraiser to get life-changing spinal surgery
Midge Bridge and her mum Mel as desparately trying to raise £45,000 so that 14 year old Midge can have life-changing spinal surgery to help correct her actute Scoliosis. Speaking to Pete Sweetmore on Rossendale Radio this morning, Mel talked about how in spite of everything, Midge still keeps smiling her beautiful smile and Midge thanked listeners for getting her half-way to their current target.
If you would like to help Midge out you can in the following ways:
Donate directly to her Just 4 Children Giving page
Text MIDGE to 70085 to donate £5
Follow her Scoliosis Journey Blog on Facebook
Keep up to date via our dedicated Valley Fundraisers Page. 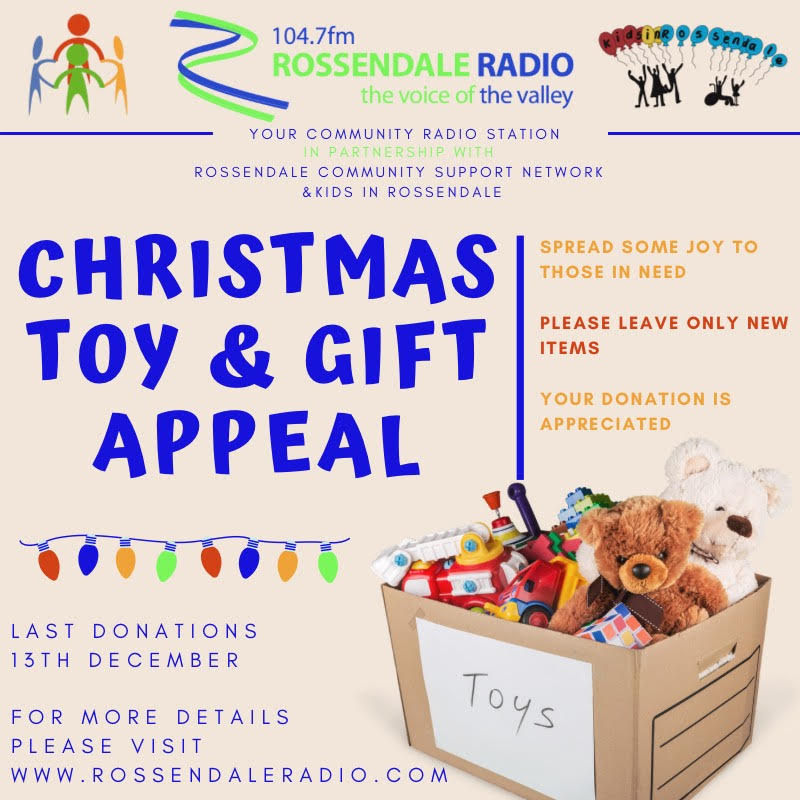 Rossendale Radio today launched it's annual Christmas appeal to help those in need at this time.

The ROSSENDALE RADIO CHRISTMAS TOY & GIFT APPEAL in association with The Rossendale Community Support Network and Kids In Rossendale will collect Toys & gifts at a number of collection points around The Valley. It is hoped all the Valley's supermarkets and other outlets will join the appeal and have collection points in their stores.

The appeal launched today with a closing date of 13th December. Toys and gifts collected will then be distributed among people referred by organisations such as CAB, Social Services and other Valley Charities.

Rossendale Radio organisers stated “Because of Covid 19, many people in The Valley will be facing hardship at Christmas and this is one way the Community station can help to support them. We know the good Valley people are always generous and happy to help those less fortunate”

If you can host a collection point, or wish to donate directly to Rossendale Radio, please email: studio@rossendaleradio.com  or ring to discuss on 07963 322966.

In lieu of the London marathon which he should have running this weekend, our very own Valley Breakfast and Weekend Wind Down presenter Paul Jenkins will be running up and down the Valley to raise funds for Lancashire Mind.

Starting at Dearden Tea Rooms in Haslingden at 7am October 4th, Paul will be hitting Helmshore, Rawtenstall, Waterfoot and Bacup before turning around at Sharneyford Primary School to do it all in reverse.

The Rossendale Radio team will be out in force along the way but if you see him, please do give him a cheer, a pip of the car horn or throw some jelly babies his way to keep his spirits up. You can tune in to 104.7FM Rossendale Radio in the morning to hear about his progress and maybe get an interview from the road. Then tune in at 4pm to see if Paul made it back in one piece to host his afternoon show.

You can still donate at his Just Giving page HERE if you'd like - it would be hugely appreciated as it's for an amazing cause.